- May 12, 2020
The third and final cemetery along the Freedom Trail sits near the northern end of the city, and is the second-oldest burial site in Boston.  Copp's Hill Burying Ground is the final stop of the Freedom Trail that sits on the Shawmut Peninsula, the original extents of the city, and is perched on one of three hills that rise above the surrounding land and harbor.  Formerly known as the North Burying Ground, this plot of ground has served as the final resting place of Boston residents since 1659 and is the largest of the town's colonial cemeteries.

Copp's Hill was a tactically important location for the British during the American Revolution, as it provided a vantage point from which cannon could be fired towards Charlestown across the river.  During the Battle of Bunker Hill, artillery posted at this location fired on colonial fortifications atop Breed's Hill, apparently to little effect.  It is said that British infantry used the grave markers within the Copp's Hill Burying Ground for target practice, an assertion which is supported by the number of bullet scars in the stones marking tombs of several patriots.  Captain Daniel Malcolm, a member of the Sons of Liberty and a noted smuggler that resisted the Townshend Revenue Acts, died six years before the Revolution began and his marker within Copp's Hill shows at least four scars apparently caused by British guns at close range. 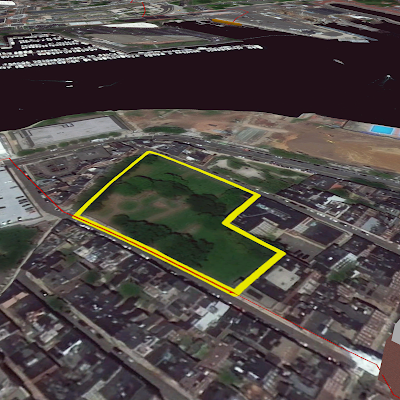 Today, the many graves that were disrupted by the Revolution and the presence of Puritan ministers Cotton Mather and Increase Mather make Copp's Hill Burying Ground a favorite among haunted history enthusiasts who believe their restless spirits still roam the grounds.  Other significant "permanent residents" here include Robert Newman (who hung the lanterns in Old North Church) and Phillis Wheatley (a former slave, poet, and the first published African-American woman).  In fact, a significant number of free African Americans fill the western side of the cemetery that was primarily used for merchants and artisans from Boston's North End neighborhoods.  There are more than 1200 marked graves and 272 tombs, altogether containing more than 10,000 remains, covering the 2 acres of land.  The city's website, which includes a map of burial sites, can be found here: https://www.boston.gov/cemeteries/copps-hill-burying-ground.