- April 07, 2020
We've gone through half of the sites along Boston's Freedom Trail.  Have you learned anything new?  Does anything surprise you about these historic locations?  Obviously nothing replaces seeing these places in person, but if you're too far away with no plans to travel in the near future then I hope the brief posts and links to helpful websites are at least piquing your curiosity to learn more on your own.

This week we'll delve into the story of Boston's oldest public building, the Old State House.  You'll probably recall that we've already seen one location with the "State House" designation, which has housed the majority of Massachusetts government operations since 1798.  Once the center of royal authority in Massachusetts (originally known as the Town House after its construction in 1713), this week's focal point is now a museum housing such interesting pieces as the pre-Revolution Royal Governor's chair, tea from the actual Boston Tea Party, a coat belonging to John Hancock, and artifacts such as weapons and ammunition from the Revolution. 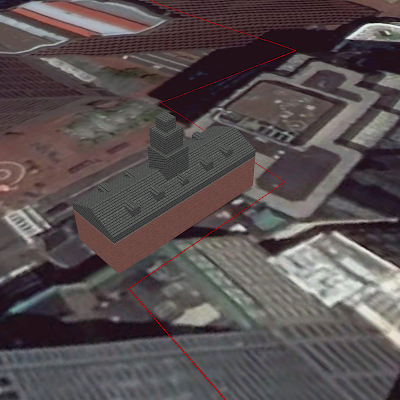 The history of the Old State House begins, as several of our locations have, with an older wooden structure that was damaged by fire and replaced with brick construction.  Fire would impact the site at least twice more - once in 1747, which required the interior to be completely rebuilt, and again in 1832.  It was the fiery oration of James Otis within this building, however, that may have impacted the nation most of all.  In 1761 the lawyer was hired to argue against Britain's Writs of Assistance, which allowed officials to search for illegal goods without proof or cause, and he delivered a four-hour speech that compared a man in his home to a prince in his castle.  His case was unsuccessful, but John Adams proclaimed that it was at this moment that "the child independence was born".  It was only appropriate, therefore, that it was from the eastern window of the Old State House that independence was proclaimed to the citizens of Boston on July 18, 1776.

After the new Massachusetts State House was completed and government was transferred, the Old State House served several uses, including as a commercial office building and the town's city hall.  In 1881 a group called The Bostonian Society was organized to save the property from demolition and recreate it as the museum that it is today.  The groups that operated the Old South Meeting House and the Old State House merged in January, 2020 and you can find out more about the history and events that this beautiful structure hosts at their website: https://www.revolutionaryspaces.org/history-osh