- March 31, 2020
America's most famous party started right here.  This week, we turn our attention to the Old South Meeting House.  When you see the structure, you'll immediately think it looks like a church, and that's because it is.  In colonial times, meeting houses were built with public (tax) money, but served many purposes including regular religious worship.  As early as 1669, the site was home to a wooden Puritan meeting house, known as Boston's "Third Church".  First Church was the original 1630 congregation, started by John Winthrop, followed by Second Church in 1649.  It was in 1729, however, that Third Church was rebuilt in its current brick form as the largest building in Boston. 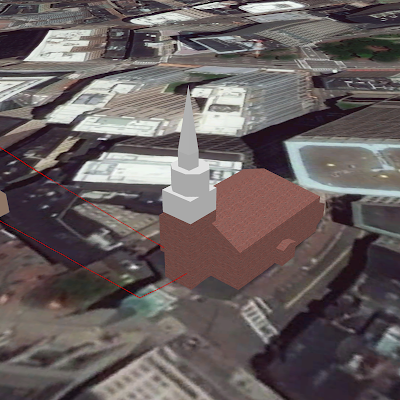 Old South's size made it a perfect location for large segments of society to gather, and this is precisely what began to happen as patriots and loyalists began to choose sides during the pre-Revolution years.  Thousands of citizens would crowd inside to hear orators and debates.  After the Boston Massacre, annual meetings were held on the anniversary to commemorate the event.  But it was a meeting that failed to reach a compromise that cemented the building's legacy - on December 16, 1773 a debate at Old South over Britain's punitive tea tax led to a group of men, the Sons of Liberty, to don Native American apparel and board several ships to relieve them of their cargo.  A total of 342 chests of tea were thrown into the harbor during the Boston Tea Party, a pivotal moment during the escalation of hostilities that led to war and independence.

The significance of the structure was not lost on the British.  Under General Thomas Gage, the commander of British forces in America, the building was occupied and re-purposed as a horse riding arena during the cold winter.  Tearing out the trappings of a church and replacing it with dirt and animals was likely not popular with the pious residents of Boston, but it was not the last time the Old South Meeting House was threatened.  In 1872 a massive fire nearly claimed the building, and shortly thereafter the congregation opted to move to a better neighborhood.  The original plan to tear down the structure was prevented by the efforts of a group of Boston women who gathered the support of several Boston celebrities (including Ralph Waldo Emerson, Louisa May Alcott, Julia Ward Howe, and Henry Wadsworth Longfellow) and other concerned citizens to purchase the building from those who had bought it at auction.  One of America's first historical preservation efforts has lasted to this very day, and the Old South Meeting House survives as both a museum and a location where free speech events may still be held: https://www.revolutionaryspaces.org/history-osmh/