- February 18, 2020
I know that last week I mentioned that the State House was one of the few sites that is from after the American Revolution, so it may seem odd that we now turn our attention to a church that was founded some 30 years after the Declaration of Independence was signed.  And yet the Park Street Church remains historically significant for two reasons - first, because it stands on the site of the city's old grain storage, and second, because it is beside next week's focal point, the Granary Burial Ground.  The property, standing just across the street from Boston Common, would have obviously been an important location to the citizens.  Henry James, a famous 19th century writer, regarded Park Street Church as "the most interesting mass of bricks and mortar in America" and from the beginning of the 19th century until shortly after the Civil War its status as the tallest building in town made it the first recognizable landmark that could be seen by visitors to the city of Boston.  This church building, in addition to sporting a steeple reaching 217' above the corner of Park and Tremont Street, hosts an active congregation to this day.  This intersection became known as "Brimstone Corner", and whether that is in reference to the fiery sermons that could be heard from within the building, or to the gunpowder that was housed there shortly after its construction during the War of 1812, remains the subject of some conjecture.  Either way, the church has stood for years as a leading evangelical congregation that combines orthodox theology with considerable care for social justice.  Among the firsts that the church claims are America's first Sunday School, the first public anti-slavery statement by famed abolitionist William Lloyd Garrison, and the first singing of America (My Country 'Tis of Thee).  Please feel free to check out their website at https://www.parkstreet.org/ 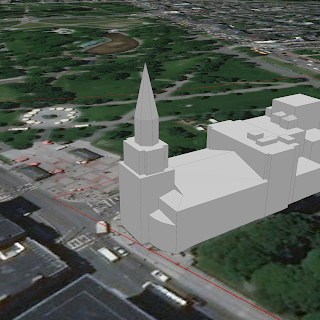