- February 24, 2020
This week's site along the Freedom Trail, although we are once again studying a location that predates the American Revolution, does not necessarily lend itself very well to the 3D mapping that you have seen over the past few weeks.  And that is because, other than the markers that stand along the ground, the primary points of interest lie just a few feet below the surface.  Settled in a plot of land immediately beside the Park Street Church, you will discover the Granary Burying Ground - a cemetery that serves as the final resting place of many of Boston's most famous residents.  Named for the grain storage building that used to sit between it and Boston Common, this 17th-century burial ground contains approximately 2,300 grave markers but is estimated to contain the remains of over 5,000 individuals - hundreds of whom are infants.  In the map below I have added a few markers to help you spot some of the names that may be familiar. 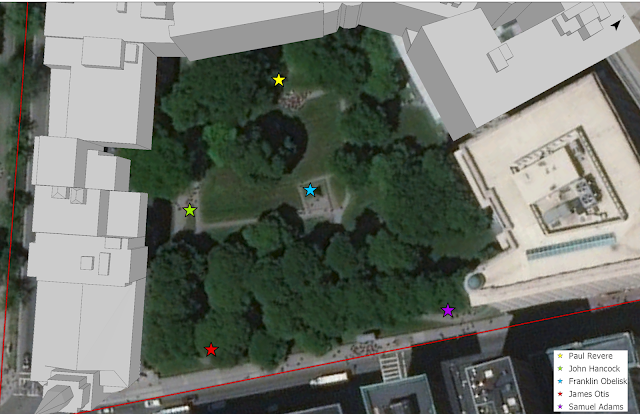 As you can see from the legend, many of the patriots we've already discussed are here.  Although Benjamin Franklin's final resting place is in Philadelphia, his parents were among his family members who were buried in Boston at the center of the Granary Burying Ground.  Samuel Adams, whose grave lies near the front of the cemetery (with a marker matching fellow orator and patriot James Otis' grave on the opposite side of the entrance) was laid to rest beside the five victims of the Boston Massacre.

Many of the burial markers have succumbed to the eroding ravages of time and weather.  The nineteenth century saw an end to new internments, as well as various attempts to improve aesthetics and navigation for visitors - landscaping was added, a walking path was built, and marker stones were aligned more neatly in rows.  Today, in addition to hearing educational guides (some in period costumes) and browsing the informative signs, you can also take advantage of haunted tours to decide for yourself whether ghosts are part of the story of this historical location.  Just be careful where you step - as recently as 2009, a tourist stepped through a weak spot in the soil to expose descending stairs that led to a deeply-buried crypt and its previously-unknown remains.